A few friends and I decided to be adventurous over the weekend and we would walk from Kallang MRT to Bishan Park via the Park Connector. The distance indicated at the start of the walk was 6800m. "Oh... it wouldn't take very long. I can easily cover that kind of distance in 1 hour plus." said Hong. If we started early, we could easily be at Bishan for brunch with time to spare, or so we thought.

Keeping an eye on Little Terns along the way, I saw only 2 of them fly inland from Sir Arthur's Bridge. No luck again when I reached the posts. There were some aunties and uncles fishing there. Some were catching the fish for food, some to put into their aquariums, and some just for sport. I do not like fishing as a sport, even if the fish is released back into the waters. Most people use hooks, and what is the point of releasing the poor fish after injuring its mouth? This is so cruel. We humans tend to think of animals as not being capable of feeling pain, especially if they are the kind we eat. 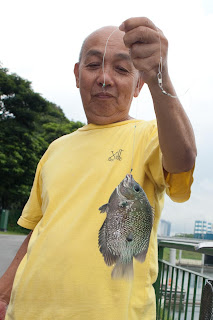 The park connector brought us to Kolam Ayer, a block of HDB flats with their own waterfront park. I am sure the owners must be very happy to have these units at the higher end of HDB prices, but with a wonderful view of their surroundings.

After Kolam Ayer, we crossed the road over to the former National Aerated Water factory where they used to produce soda drinks like Sinalco. The trail, up to this point, was not difficult because NParks has placed markers at critical points to indicate direction. We had to walk away from the river near Moonstone Lane to cross the PIE using an overhead bridge. The trail continued along the river beside St Andrew's Junior College and St Andrew's Junior School. They have their own bridge to cross between the two campuses on opposite sides of the river! 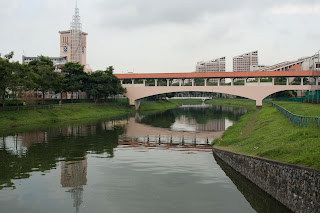 Arriving at Potong Pasir, all of us immediately noticed a difference. The atmosphere was more laid-back and peaceful. There were many mature trees around and the place looked so green, unlike the usual PAP towns where all the trees are well trimmed and so... not green. 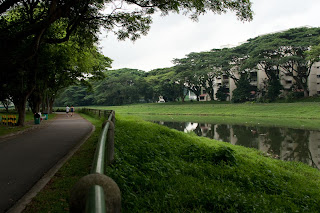 Well, maybe we should not judge the town just from looks, but the area definitely looked nice with all the lush greenery near the river.

We did not make it to Bishan Park in the end, because yours truly developed a muscle pull in the left leg and we had to abandon the walk to lunch at Junction 8.