The White-bellied Sea Eagle is one of the largest resident raptors (bird of prey) found in Singapore. The markings on this bird are unmistakable. It has a white head, neck and underparts, with white upperwing-coverts contrasting sharply with blackish flight feathers. The juvenile may be a bit more confusing to the untrained eye but still easily identifiable. 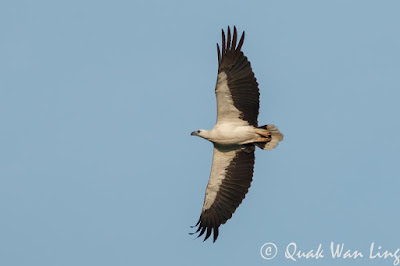 I was very fortunate to have spotted this nest. The parent birds have chosen to build their very large nest on a dead tree at the edge of a big field, which happened to be right next to a busy expressway! Food was not a problem because this was near a reservoir with plenty of fishes.

When I found them, the eggs have already hatched and I could see two chicks. The parents usually came back with food for them in the mornings. Maybe they fed them in the afternoons too but I was not there to witness it. As the nestlings grew bigger, they stood up more when eating their food and it gave me more opportunities to photograph them. Most of the time, one parent would be perched on a nearby tree to keep an eye on the young ones. I have seen crows trying to harass them and the parent would swoop down to drive them away.

As the nestlings grew stronger, they frequently flapped their wings while standing on the nest to build their wing muscles. It soon progressed to the point where they were able to lift themselves several inches off the nest and they may spend time perched on nearby branches.

I am very happy to say that these two chicks fledged successfully. White-bellied Sea Eagles are known to mate for life and reuse their nests. Unfortunately, this particular host tree was not a very large one. There was some construction going on nearby and over time, the nest fell apart and is no longer there. Hopefully, the parents have found a better location the following breeding season and the juveniles are doing well.