This Olive-backed Sunbird's nest was built next to some hanging flower pots in a driveway. According to the owner, a pair of sunbirds once built the nest across one of their doorways.

When I started to photograph this nest, there was already an egg inside. This was slightly unusual because sunbirds usually lay 2 to 3 eggs. The mother was constantly disturbed by visitors coming in the driveway. She would fly away and try to return to warm the egg as soon as the coast was clear. Once in a while, she would fly out to feed and quickly return.

After the egg hatched, she would leave the nest and return with small insects. For the first few days, she would still sit inside the nest, probably to make sure the chick was kept warm. At 1 week old, the mother was bringing back bigger insects. One of the insects she brought back looked like an orb web spider, minus a few legs. The chick fledged at around 2 weeks old. It did not fly off very far from the nest and waited at the branches of a nearby tree for the parents to come back with food. It was well-hidden among the tree leaves.

Not wanting to burn a hole in my wallet with a pair of PocketWizards, RadioPoppers or some other brands, I have been thinking about an extra long TTL cord for my flash since I read about it in Joe McNally's blog. In his blog, he said he used a 10m cable to fire his flash. Unlike most other brands, the cable he used was straight, not coiled, and was available online from some USA company.

A little bit of research online showed many DIY projects on this topic. Since the Canon Speedlite TTL cord uses 6 wires, many people have successfully used cat5e or cat6 networking cables to extend their cords. Since I was quite handy with electronic stuff, I decided to give this a try.

Items I bought from eBay:

Other stuff you need:
The Yongnuo product was quite well made, although it was much cheaper than a Canon original. Anyway, just to be sure, I tested it. Next, I opened up both ends to make sure that there were only 6 wires because I read in a posting that some cords came with 8. 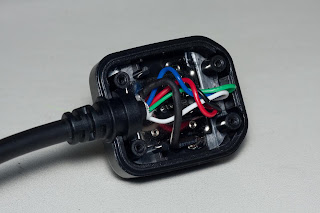 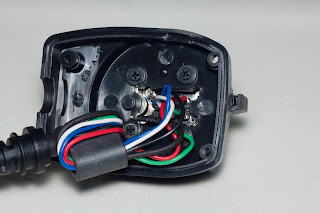 Luckily, the Yongnuo had only 6 wires. There were 2 black wires, where the thicker one is connected to the hot shoe base plate, probably to act as the ground wire. I also took this opportunity to identify the wire connections to the hotshoe plate, noting the colours.

I cut the wire not at the middle, but giving more length to the section that would be connected to the camera. I did not want the RJ45 jack to be hitting the lens barrel or the camera body. I stripped off the wire cover about 1 inch away from the cut end, taking care not to cut into the wire shield. 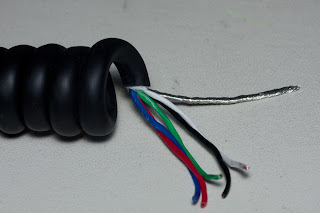 After peeling back the wire shield, I twisted it and that was the thicker black wire I saw earlier when I opened both hotshoe connectors. All I have to do now is to attach these wires to the RJ45 keystone wall plug. 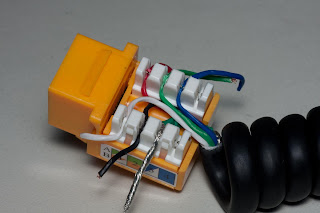 The keystone jack has 8 pins and they are numbered at the sides. The coloured wires can be connected to the pins in any order. Just make sure that both sections of the sync cord follow the same order, for eg. red to pin 7, green to pin 8 and so on. Push the wires down, like above, to hold them in place. If you have a punchdown tool, use it to push the wires all the way down. If not, the back of a penknife cutter blade will also do. At this point, do not trim off the ends of the wires yet until you have tested the connection.

If everything was done properly, connecting both TTL cords with a straight cat5e cable should do the job. My flash would not fire at the first attempt but was able to receive information when I changed the flash compensation or lens aperture. Not knowing which wire did the triggering, I had to check for continuity for all 6 pins on both cords. This can be done with a multimeter with the dial set to the speaker icon. If there is continuity, the meter will beep. It turned out one of my wires at the plug was not cut properly when inserted into the pin.

Voila! I now have a TTL cord which can be extended as long as the signal strength allows. After trimming off the ends, I put the plug cover on and used duct tape to secure it in place. Can't wait to start using it :)